Article Gallery
Oguri Tadamasa was a controversial Tokugawa bureaucrat whose efforts contributed to the modernisation of Japan at the end of the shogunate and the beginning of the Meiji Period and whose insistent calls for resistance against the forces of Satsuma and Choshu would cost him his life.

Oguri Tadamasa (小栗忠順, 1827-1868), also known as Oguri Kōzukenosuke (小栗上野介), was born in Edo to Niigata magistrate Oguri Tadataka (小栗忠敬), the 12th hatamoto samurai in his line. The Oguri had always been close to the Tokugawa, the 3rd and 4th generation Oguri had served with Ieyasu himself.

Tadamasa chose a bureaucratic career and was promoted to metsuke (目付, “inspector”). In November 1859, he received the title bungo-no-kami (豊後守) and was handpicked by Ii Naosuke, the tairō (大老, “regent”) of the shogunate, to accompany the first Japanese embassy to the United States (万延元年遣米使節 man’en gannen kenbei shisetsu) as one of its three plenipotentiary members. The embassy had been despatched by the bakufu to ratify the new Treaty of Friendship, Commerce, and Navigation between Japan and the United States. The delegation travelled on the USS Powhatan and was escorted by the shogunate’s first sail and screw-driven steam corvette, the Kanrin-Maru (咸臨丸) commanded by Katsu Kaishū, to demonstrate Japan’s mastery of Western technology.

Oguri Tadamasa spent a few months in the United States, meeting US President James Buchanan and travelling as far as Philadelphia and New York. The delegation circumnavigated the globe on US warships and returned to Tokyo in November 1860. In 1861, Oguri was involved in the negotiations with emissaries of the Russian Empire, in the course of the Tsushima Incident, in which Russian sailors who had tried to establish a base on the island of Tsushima in the Korea Strait and clashed with local villagers were finally driven off with the help of the British Royal Navy.

Oguri Tadamasa held other prominent posts in the bakufu: he served as commissioner of finance (勘定奉行 kanjō-bugyō) and as naval commissioner (軍艦奉行 gunkan-bugyō) and was crucial in negotiating revisions of tariff rates, and reforming the military system. In the bakumatsu (幕末), the final days of the bakufu, the shogunate maintained close relations with France. France despatched the largest group of foreign employees; at least eighty-four were hired by the bakufu and two by han (藩, “domain”). They were members of official missions, teachers and mining engineers. The first French-language school was set up in Yokohama in 1865.

Oguri was convinced that the shogunate depended on friendly relations with the Western powers to secure their technology and to develop the country. With French assistance and the help of loans coerced from wealthy Japanese merchants, he initiated a series of infrastructural projects vital for Japan’s modernization, such as the Yokosuka Shipyards, constructed under the aegis of François L. Verny, a marine engineer and French naval lieutenant; the iron foundry in Yokohama and the development of iron ore mines in Shimonita, modern-day Gunma Prefecture. However, Oguri would not live to see the completion of his most significant project, the Yokosuka Shipyards, in 1871.

In 1866, he assisted in planning the punitive expedition against Chōshū, sternly supporting the Tokugawa shogunate until the fall of Edo in 1868. He advocated resistance against the imperial forces even after the last shōgun, Tokugawa Yoshinobu, had already capitulated. His suggestion to fight the Satchō army at the Hakone Pass was dismissed in favour of Katsu Kaishu's plan to surrender Edo peacefully. Oguri was relieved of (most of) his official duties after a heated argument with the shogun himself.

His loyalty to the Tokugawa cause, however, would cost him dearly. In March 1868, Oguri obtained permission from the shogunate to return to his fief in Gonda village, Gunma-gun (群馬郡権田村) in modern-day Takasaki. He stayed temporarily at the Tōzen-ji Temple while awaiting the construction of his new residence on Kannonyama (観音山) Mountain. On 6 April 1868, he was apprehended by forces of the victorious Chōshu and Satsuma domains and beheaded along with three other retainers on the banks of the Karasugawa in Mizunumakawara Village. The next day, 7 April 1868, Oguri’s adopted son Mataichi and three other retainers were executed inside Takasaki Castle.

Oguri Tadamasa’s efforts have not been forgotten: he was praised by representatives of the Meiji administration, such as Ōkuma Shigenobu and Fleet Admiral Tōgō Heihachirō (東郷平八郎), under whose command the Russian Baltic Fleet in the Russo-Japanese War was defeated in 1905. The City of Yokosuka honoured Oguri with a statue along the Verny Park waterfront and organises an annual Verny Oguri Memorial Ceremony in November.

Oguri Tadamasa’s name has repeatedly surfaced regarding a mythical Tokugawa war chest that had allegedly been buried by him after the fall of the shogunate. Michael Wert, Assistant Professor for History at Marquette University, held a presentation entitled “There’s Gold in those Hills: The Tokugawa Buried Treasure Legend in Local Japan” during the panel on “Restoration Losers: Vilified People, Places and Politics in Modern Japan”, organised by the Association of Asian Studies, Atlanta, in April 2008:


Japan’s most famous buried treasure legend originated during the Meiji Restoration when the emperor’s forces failed to discover any shogunal money in Edo castle. Rumours quickly spread into the surrounding countryside that Oguri Tadamasa, the last financial magistrate, stole shogunal money and buried it in the mountains of present-day Gunma Prefecture. Throughout the twentieth-century people have searched for the gold, but treasure-hunting booms occurred in times of national economic despair, before and after WWII and during the “lost decade” of the 1990s.

This paper argues that local people play an active role in the formation of national historical narratives. It demonstrates how people in different locales in Gunma Prefecture use the legend to appropriate Oguri’s history. Oguri led the debate that tried to convince the last shogun to fight against the Satcho forces, and he was executed for his views shortly after the Restoration. Descendents from his fief villages where he lived in his final months rehabilitated Oguri as a local hero. The treasure legend narrative became part of local attempts to rescue Oguri from the dominant historical narratives that portrayed him as a villain. However, the same legend became a source of tension between local areas that sought to profit from treasure hunters and those that wanted to focus instead on Oguri’s contributions to the making of modern Japan. The construction of the Yokosuka Shipyards Bust of Oguri Tadamasa in Yokosuka 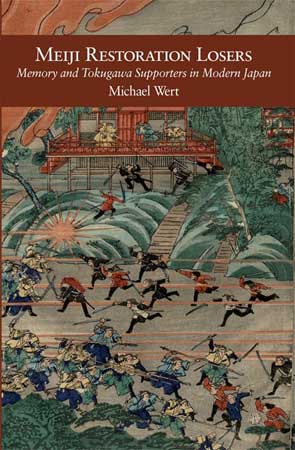