Kameido Shrine (亀戸天神社 Kameido Tenjinsha) is a Shintō shrine in the Kōtō Ward of Tōkyō. It was founded in 1662 and enshrines the deified spirit of Sugawara no Michizane, the patron of scholars and artists, who is worshipped by students at the time of their entrance exams.

Michizane was a prominent political figure and scholar in the Heian Period who died in exile in Dazaifu (in modern-day Fukuoka Prefecture) where he had been banished by the powerful Fujiwara clan. He was later worshipped in Dazaifu Tenman-gū (太宰府天満宮) Shrine. In the mid-17th century, Sugawara Ōtori no Nobusuke, the head priest of the Dazaifu, sought to set up another Tenman-gū shrine in Edo, then the seat of the shogunate, in addition to the already existing Yushima Tenman-gū established in the fifth century. After the great Meireki Fire of 1657, the shōgun was more than willing to support reconstruction projects and donated a plot of land in Edo's Honjo district, next to a plum garden in Kameido on the eastern edge of the city. Coincidentally or not, the plum blossom was also in the coat of arms of the Sugawara.

Kameido Tenjinsha was modelled on the Dazaifu, with a heart-shaped pond in front of the shrine and two red drum bridges (太 鼓 橋 taiko-bashi) built across. The outer, larger one is the "Men's Bridge" (男 橋 Otoko-bashi), the inner, smaller one the "Women's Bridge" (女 橋 Onna-bashi). Another bridge is in the centre and is flat (hirabashi). The three sections of the bridges represent the past (the steepest section), the present (the flat part), and the future (with a shorter climb). Along the pond, wisteria-covered trellises with were installed. The wisteria (藤 fuji) was a symbol of the Fujiwara clan.

Not only the shogunate but also the imperial court in Kyōto promoted the shrine. Go-Mizuno-tennō (1596-1680) is said to have written the nameplate as well as poems to Tenman Tenjin. In 1677, Tokugawa Ietsuna visited the shrine. In 1873, it was designated a prefectural shrine (府 社 fusha) and renamed Kameido-jinja (亀戸神社), and eventually, in 1878 Kameido Tenjinsha.

The roof of the former entrance gate was decorated with shijin (四神), the gods of the four cardinal directions represented by animals in characteristic colours, which in Chinese mythology are assigned to the four cardinal directions. The east is marked by the Blue Dragon (青龍 Seiryū), the south by the Red Bird (朱雀 Shujaku); to the west is the White Tiger (白虎 Byakko), to the north the Black Turtle (玄武 Genbu). The shrine burned down during the Second World War. While the two-story gatehouse (楼門 Rōmon) was not rebuilt, the current structure is a reproduction in reinforced concrete.

On January 24 and 25, just like in the Dazaifu on January 7, the so-called Liar Ritual (うそ替え神事 usokae shinji) is performed. Usokae is a pun on uso (鷽 bullfinch), a bird, and uso (嘘), a lie. Worshippers hope that by exchanging wooden uso birds, last year's lies may turn into something good. Since Sugawara no Michizane is the patron of science, many students visit the shrine at the time of entrance examinations for the universities in January and February, to place wooden prayer plaques (絵馬 ema) there. In the early summer, the wisteria are in full bloom, and the Fuji Matsuri is held from the last week in April to the last weekend in May. Many worshippers and tourists visit Kameido Shrine and enjoy the nighttime viewing. Rice balls (葛餅 kuzumochi) dusted with spiced flour are sold at the entrance by the Funabashiya shop since 1805.

The popularity of Kameido Tenjinsha is reflected in the number of ukiyo-e depictions. The most famous is Hiroshige's 'Big Drum Bridge', but there are countless others. 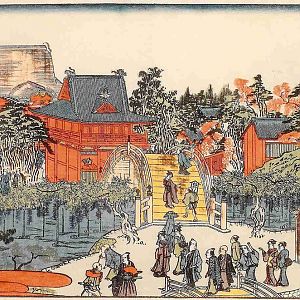 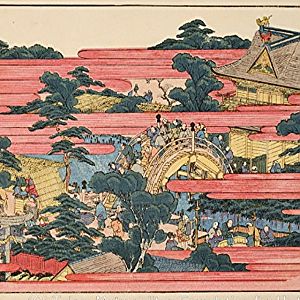 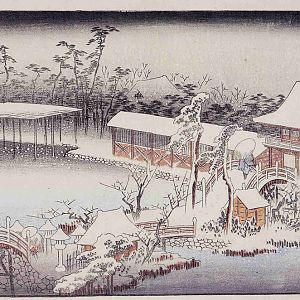 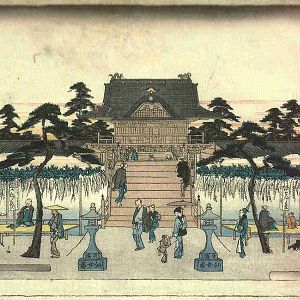 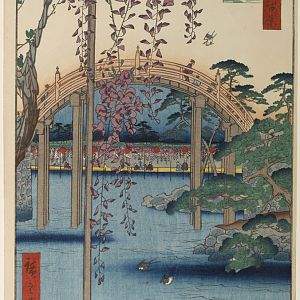 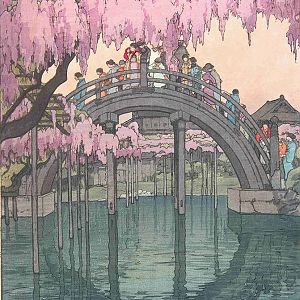 The current shrine is a postwar reconstruction. A statue of Sugawara no Michizane. Usodori figurines are bought at the shrine. When worshippers tell their problems to the wooden bullfinch, all the negative is turned into positive, as they are ’liar birds’ and supposed to bring good luck in the coming year. At the end of the year, the usodori are returned to the shrine and burned. The main building of the shrine with Tokyo Skytree in the background. The famous heart-shaped pond with the trellises.