The Hundred Caves of Yoshimi (吉見百穴 Yoshimi Hyakketsu) are ancient burial sites carved into the sandstone of the Yoshimi Hills in Saitama Prefecture. The 219 caves date back to the sixth and seventh century C.E. and are located east of Higashimatsuyama, about fifty kilometres northwest from Ikebukuro, Tokyo.

The ancient grave cluster in Yoshimi, Saitama Prefecture
Yoshimi Hyakketsu, or Yoshimi Hyakuana, as they are called by the locals, can be translated as “the Yoshimi one hundred caves” and are ancient tombs unearthed in 1888 by Tsuboi Shogoro (坪井正五郎, 1863-1913), who is considered to be one of the founders of Japanese anthropology and archaeology. At the beginning of his archaeological studies, it was believed that the caves were initially inhabited by the local population, but further research in the 1920s proved that they were used as tombs for high-ranking local leaders and Chinese and Korean dignitaries who introduced continental Asian culture to Japan. 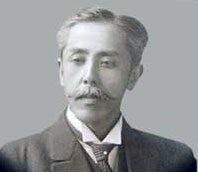 Prof. Tsuboi Shogoro
Most of the graves date back to the Late Kofun (burial mound) period, also known as Asuka Period and – on average – have an entrance of one meter in size. The tombs’ interior, however, is much larger. The graves run along the hill from west to east, with their entrances slightly varying in size due to the proximity to the top of the mountain. Those differences in size and location seem to have reflected the status of those buried in the graves. Most caves have elevated structures in their centre resembling pedestals which are believed to have held either coffins or the bodies of the deceased. Some caves show several pedestals and might, therefore, have been used as family burial grounds. Traces of chlorite schists found at the entrance of some graves also indicate that the caves were sealed with stone plates. Yoshimi Hyakketsu is the largest grave cluster in Japan and was designated as a National Historic Monument on March 7, 1923.

Another local attraction growing right on the grounds of Yoshimi Hyakuana is a species of luminescent moss (schistostega pennata, called 光苔 higarigoke – or shining moss) found inside some of the caves which have been sealed off to protect the rare plants. They grow in several locations in the Kantō region, usually on damp mineral soils in shady places and can reflect even the dimmest light.

The ancient grave cluster in Yoshimi, Saitama Prefecture
In the final days of World War II, some of the caves in the Yoshimi Hills were enlarged to hold production facilities of Nakajima Aircraft Factory, one of Japan’s munitions manufacturers. The caves were dug by Korean forced labourers and can still be visited, although only 10 per cent of the original caves can be seen.

Tunnels dug at the end of WWII by Korean labourers, meant to hold a production line for the...
Visitors can roam freely about the hole-dotted grave hill. There are two souvenir shops as well as a small archaeological centre that displays some of the artefacts discovered in the burial sites by Prof. Tsuboi and others. Yoshimi Hyakuana is a popular site, especially during the cherry blossom season, and a regular destination for local elementary and high-school classes, but will be quite deserted during weekdays.

Grave entrances at the main cluster

On the road leading to the archaeological site in Yoshimi lies the Iwamuro Kannon Hall, a small Buddhist temple resting on stilts dedicated to Kannon, the Bodhisattva of Compassion. It was constructed during the Edo Period. The Iwamuro Kannon holds 88 stone images of Kannon which are said to be copies of the gods residing in the 88 temples of the Shikoku pilgrimage sites. Each statue displays the date and the name of the sculptor.

Iwamuro Kannon Hall resting on stilts and holding 88 stone figures of Kannon, the Bodhisattva of...
Also nearby is the Yoshimi Kannon, formally known as Anraku-ji (安楽寺), the eleventh station (札所 fudashō, or Bando No.11) of a local pilgrimage route, with a beautiful main hall and a three-storied pagoda that reaches a height of 24 meters.

Another local curiosity is the Gankutsu Cliff Hotel (岩窟ホテル), a structure chiselled into the sandstone by a farmer named Takahashi Minekichi between 1905 and 1924. Gankutsu (岩窟) means “cavern”, and the place was never meant to be a hotel, but was more of an obsession. It is now surrounded by a tall fence and barbed wire. The local souvenir shop in Yoshimi run by Mr Takahashi’s family has more photos and information on display.

The Gan Kutsu Hotel, carved into the stone by the local farmer Takahashi Minekutsu. He started...
Not much remains of Matsuyama Castle which was constructed just south of the grave hill between 1394 and 1428 by the Ueda clan, descendants of the famous Minamoto, and finally abandoned in 1601. Nowadays only a stone monument erected as a memorial to the Sengoku Period can be seen on top of the hill.

Stone images of Kannon, the Bodhisattva of Compassion
More photos in the Yoshimi Hyakuana album.

Admission: 300 JPY for adults and high-school students, 200 JPY for children.